I am always intrigued by Malaysian cuisine, as it has evolved from various cultures over the years. It combines the spices from India, China and Thailand. It is so versatile yet unique in it’s own way. A taste close to home yet not. Here is one of the easiest and house special Laksa soup. It is very warming and comforting bowl of goodness on a cold evening. You can use chicken, seafood, fried tofu or all of them in this soup but I am going with seafood and vegetables.

For the Laksa Paste:

a big chunk of ginger or galangal

Blitz the ingredients together with water to form a nice yellowish paste. Add more turmeric if it isn’t bright yellow.

In a pan, heat the oil. Add the paste and cook it thoroughly for 5 minutes or until the oil separates. Then add cauliflower and water. Cook until the cauliflower is al dente and then throw in the greens and bean sprouts along with the fish. Add all the seasonings (fish sauce, sugar, lime juice and soy sauce). Once the fish is cooked, remove the fish separately. Last step is to add the coconut milk and let it simmer for just a few minutes. Make sure the vegetables are not overcooked.

Serve hot on a bed of rice noodles or jasmine rice. Garnish with fresh coriander.

Tip: If using shrimp paste, please remember to taste as you cook. Shrimp paste is very salty so be careful with the rest of the seasoning. 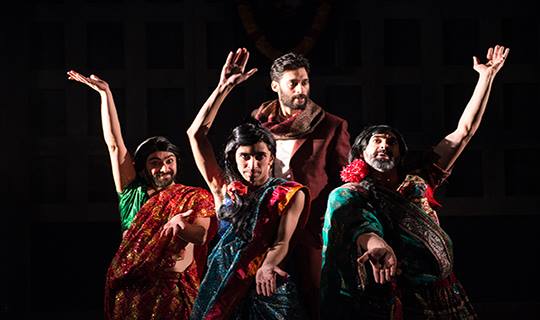 Having grown up in Mumbai, India’s arts and culture capital, theatre has been an integral part of my life. After a long day at university, my mates and I would simply go to the local theatre’s cafe for a bite and mingle amongst the artists – soaking up the atmosphere and ending up meeting some really interesting characters and having very many interesting conversations. Years later living in the increasingly lively Margate and going to Theatre Royal feels like both a luxury and nostalgic treat.

. Of the Bard’s works, Macbeth

, was one I first read when I was too young to understand it and over the years ended up reading it a few times. On some level the play brought back the feeling of discomfort in understanding the language, the struggle to keep up with the pace of events and also made me flinch at the many gruesome deaths. Yet Tara Arts, who brought an elegant element of Asian culture to the production, also cleverly tapped some of the sometimes underplayed comic elements to the play, with the porter particularly relishing her part.

In Tara Arts Macbeth, the witches who foresee Macbeth’s fate as the future King were three hijras (India’s transgender community), bringing an element of colour, humour and entertainment. The crown of the King was replaced by turbans and the swords were replaced by punches and streetfighting, with the action scenes built to a crescendo by a very talented drummer on stage who, whose understated percussion and occasional beatboxing complemented rather than jarred with the minimal, very effective set.

One of the scenes that stood out for me was when Macbeth lost the plot at a feast they had laid out for the Scottish nobility. Macbeth’s insanity was the most apparent as he started seeing the ghost of Banquo, sending him off to an outrage.  Another scene that was very well played was that of Lady Macbeth (who also goes insane) sleepwalking and washing her hands constantly to get rid of that famous spot of blood (which only she can see) and being unable to cleanse herself, commits suicide.

Whilst I doff my hat to the Director Jitender Verma and the cast of this new production, I have to mention that I was particularly impressed by the supporting actors, the stage presence of some of whom was comfortably equal to an excellent Robert Mountford and Shaheen Khan playing the characters of Macbeth and Lady Macbeth. As for the lines, I didn’t hear one being fluffed all evening.

Replacing rosé with running... my two year adventure off the booze and changing my life

A RESULT OF PREGNANCY BOREDOM

My journey towards positivity, my little place, my own world

All things fashionable and fabulous

young mummy starting out in the blogging world

"If you are resolutely determined to make a lawyer of yourself, the thing is more than half done already" - Abraham Lincoln.

Who needs a life when you've got kids?

A blog full of humorous and poignant observations.